Essex is the driest county in the UK. The driest spot of all is St Osyth, with a mere 507mm per annum on average. Whilst Epping's average is quite a bit more at 679mm, this is still drier than most places in the UK.

Here are the monthly averages based on the Woodberry Down station over 1979-2013:

Epping is in the warmest region of the UK in summer, and one of the coolest for its altitude in winter.

The graph below shows how these temperatures vary through the year, and also shows the hottest and coldest temperature in the month averaged over the data period (1979-2013). 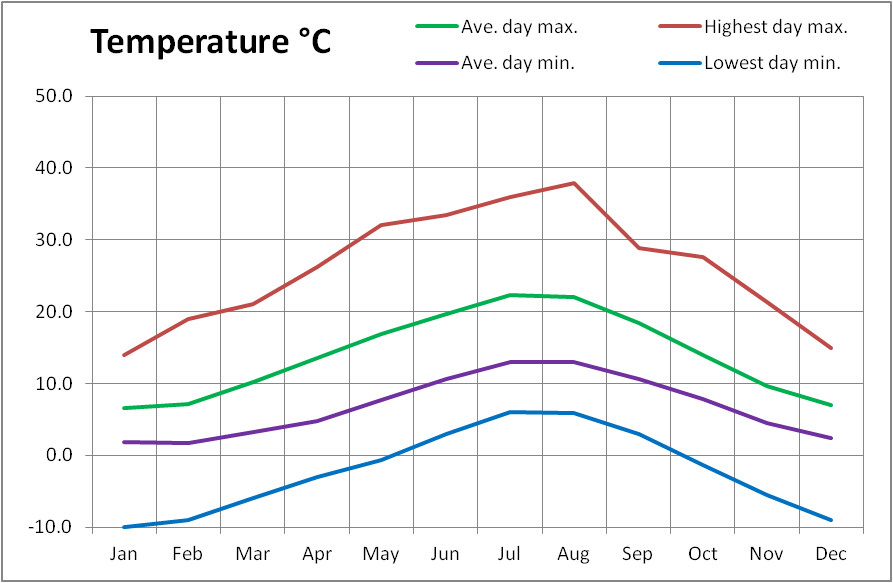 The hottest temperature on record was 37.9°C on 10th August 2003. (Sadly there was no weather station operational in Epping when the UK's highest ever temperature of 38.7°C was recorded in Cambridge on 25th July 2019.) A heatwave in July 2006 recorded the highest number of days where the temperature peaked over 30°C, with ten, including six days in a row; six successive days was also recorded in August 2020.

Records only cover 2003-2013 and since 2020, but the highest pressure of 1049.3 hPa (hectopascals are also referred to as millibars, or mb) on 19th January 2020 came at the time of the highest ever recorded pressure for UK of just over 1050 in Cornwall, so it is a pretty good assumption that this is our record air pressure. At the other end of the scale, our lowest recorded barometer reading was  968.2 hPa on 10th March 2008.

Photo: The Green in a snowy January 2010

This website uses cookies to improve your experience while you navigate through the website. Out of these cookies, the cookies that are categorized as necessary are stored on your browser as they are essential for the working of basic functionalities of the website. We also use third-party cookies that help us analyze and understand how you use this website. These cookies will be stored in your browser only with your consent. You also have the option to opt-out of these cookies. But opting out of some of these cookies may have an effect on your browsing experience.
Necessary Always Enabled
Necessary cookies are absolutely essential for the website to function properly. This category only includes cookies that ensures basic functionalities and security features of the website. These cookies do not store any personal information.
Non-necessary
Any cookies that may not be particularly necessary for the website to function and is used specifically to collect user personal data via analytics, ads, other embedded contents are termed as non-necessary cookies. It is mandatory to procure user consent prior to running these cookies on your website.
SAVE & ACCEPT